That can be a word, right? Sure it can!

We went to Skagen on Monday and got home late last night. Skagen is a funny sort of a coastal town. For one thing, almost all the houses are yellow. I don't know what it was that made almost everyone paint everything that colour, but it's apparently referred to as "the yellow fever." It was nice and sunny. I wore a dress and was girly (autocorrect wanted to make that Gorky. What the hell?) the whole time. We stuffed ourselves with ice cream and pies and such. I have yet to see if my pants still fit... I might just save that for tomorrow.

So my phone had what can, at best, be described as a mental meltdown and ate all my whatnot pictures and all of the blogposts I had on there. The line between smartphone and stupidphone can be very thin. And then I decided to have myself a summer vacation.

Now let's see...what have I been up to... Well, I've wrestled with out garden. I've planted roses and other stuff that smells nice. I practically almost have a tan! I did taxes for my business for the first time, which totally makes me a grown-up. I'm learning Japanese. This is mostly because I want to play those Japanese video games that are never translated, which might subtract from the grown-up thing just an itty bitty bit, but I figure that a Japanese-speaking me is still cooler than the version of me that only speaks a measly four-and-a-half languages, am I right or am I right?

And now, look at my (apparently sideways) garden! 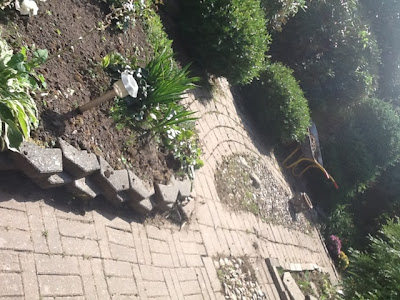