Things that go buzz in the night

Last Friday was my birthday. Never mind how old I was. Some of my oh so clever friends decided to stick their wallets together and buy me a gift. This resulted in two little presents and one larger one. There was quite a bit of giggling as they handed it over, but they always giggle for every little thing (and they're almost thirty. How's that for scary?), so I didn't give it much thought.
Now, as always, my mums came to visit me on my birthday to eat cake and bring presents for me to open. It's a lovely tradition, really. Then came the time to open the presents from my friends.... The first little present contained a battery. The second little present contained another battery. And the third, and final present contained A BLOODY HUGE VIBRATOR. Just the thing that you want to wave around in front of your parents, ain't it? Ehm... No. 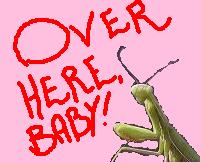 I just read in a magazine that a male praying mantis can't mate with his head still attached. So the female (bless her little heart) does him the favor of ripping it off first. I also heard somewhere that a cockroach can live for several days with it's head torn off. I guess, if you could get a cockroach and a praying mantis together, it might be a long and meaningful relationship.
After lenghty discussions with friends (or dissections, if you will) of our individual love lifes - or rather, lack of such - I have come to the conclusion that this pretty much sums up my whole problem with men.
My relationships, much like the connections between a male and female praying mantis, are pretty much over before they even begin, although there have been exeptions to this rule, as well. I just thought I'd mention, by the by, that I do not tear their heads off. Granted, men can at times irritate you so badly that you might want to tear their heads off (both of'em), but sane people (Yes, I am, dammit!) can usually restrain themselves. Generally, I'm just no more interested in the guys who seriously fall for me, than a praying mantis would be in a cockroach.
Just for the hell of it, I actually buried my lovelife in the garden this summer. I gave it a tiny little tombstone, and everything. The neighbour might have looked at me funny, but they're really weird, so who cares? Now, if I could only fall in love with a nice, stable cockroach, I could dig it back up again:)
Posted by choochoo at 2:33 PM 6 comments:

I dream of bedpans

That's it - I'm over worked. For the second time in less than a week, I've had what I refer to as "THE BEDPAN DREAM"...
In my dream, I'm trying (not to mention failing) to balance a gigantic bedpan, so that the content won't spill out all over the place. It's in no way a roaring success. Or any other kind of success, for that matter. The damn thing keeps rocking back and forth, much like my mum's old dingy did whenever the wind blew a bit. Thankfully, there's no wind when I'm balancing the bedpan from hell...
Giving someone a bedpan, is not fun. First of all, you have to roll the patient over. And why the hell do they call them "patients", anyway??? Never has a term been so misleading. But I digress. As I said, you roll the patient over to the side. That's the easy part. Then you stick the bedpan under their butts, and roll them back. The patient will then proceed to go about their business for a while. At this point, you might wanna wait out in the hallway, or something. It's the polite thing to do. Once that's done, you come back into the room, and roll them over to the side again. And this is where it gets tricky... 'Cause now you have to pull out the bedpan from underneath the patient. That's right. You pull. If you pull to hard, you'll regret it. A lot. I've never done that, but I'm still young.

pic borrowed from http://www.jwolfe.clara.net
Posted by choochoo at 10:04 PM 4 comments: