When I was a kid and I didn’t want to eat the crusts on my sandwiches, my mum would remind me that there were children starving in Africa. I thought that, in the event that I should put my bits of bread in an envelope and send them to Africa, they would be pretty inedible by the time they got there. Also, it seemed to me that the best way to help the starving, would be to not stuff yourself full of food when you were no longer hungry.

I guess what my mother was really trying to teach me, was to be grateful for the things that I had, and not how to solve world hunger.

Last night, I tried to keep that lesson in mind after I dropped my last slice of pizza on the floor. Pooch knows full well that if something edible lands on the ground, that doesn’t necessarily mean that it’s hers to pounce on. However, if this something edible falls directly on her head, the rules change.

At that moment in time, Pooch, at least, was very grateful for what she had…
Posted by choochoo at 5:00 PM 7 comments:

Life and death of Mr. Sausage-Rope. 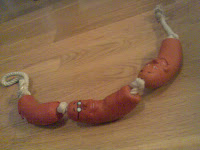 I have mentioned in the past how much Pooch loves Pigface, her hysterically pink puffer fish-pig squeaky toy. But once upon a time, in the grocery store, I bought another potential friend for her.

There he was, hanging from a rope with the other members of his family, just people-watching. I picked him up, dangled him back and forth a little, evaluated his shape, colour and all the little faces on all the little sausages. Briefly I wondered what it would smell like, but then I pictured myself standing there, in the middle of isle 4 while sniffing a dog toy, and changed my mind.

Into my little, blue basket went Mr. Sausage-Rope. He didn’t even have time to pack or say goodbye to his family. But I suppose that they had prepared for one of them getting bought, and that they’d therefore done all the goodbye-hugs-and-kisses-stuff. That would make the most sense.

The first thing Pooch did when she was given Mr. Sausage-Rope, was to remove one of his noses. Actually, “remove” might be the wrong word. She held him down with her front paws, grabbed his nose with her teeth and tore it off, along with his mouth and parts of his right eye. Then she spent half an hour bouncing around the apartment whilst throwing the nose up into the air and catching it again and again. 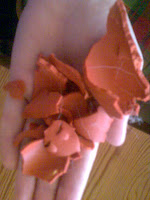 Then, after the original carnage, Pooch was content to carry Mr. Sausage-Rope around in her mouth, giving him a thorough shake every once in a while. Early one morning, I found Mr. Sausage-Rope in a corner of the kitchen, where Pooch had tossed him the night before. One of his sausages had gone mysteriously missing. The rest didn't have noses anymore.

Pooch was sleeping in the sofa, like a little angel. A little angel covered in small, brown pieces of plastic. Some of which had what looked like a nose on them.
Posted by choochoo at 5:00 PM 9 comments:

My poor Eggbert is still at the hospital in Big City for sick computers. I had thought that with Eggbert being away, and therefore unable to distract me with games and such, I would get more work done. After all, Hallbert, who is Eggbert’s understudy, is getting on in years. He’s not very fast or playful. Also, being a laptop, Hallbert, with all his slow seriousness, can go with me wherever I am. So there’s no excuse not to work on my thesis.

But I can always count on the universe to assure that my plans never, ever turn out the way I thought.

Take the other day, for example. I took Hallbert and my papers with me to the park. If you can call a small path with a large puddle covered in reefs and algae a park. Actually, it’s more like a swamp with a bench in it. But I digress. The plan was to do all sorts of scientific, serious research-stuff. However, the universe immediately set out to wreak havoc on my plan.

First came the annoying bee. Bees don’t bother me, but this one was determined to crawl up my nose and would not take no for an answer. Then came the screaming children who were left to wait in the car for their parents just a few paces away. Their considerate folks had let them open up all the windows, to make sure they didn’t use up all the oxygen in the vehicle with all their jumping and howling. After a while I began to suspect that their mum and dad had abandoned them. Not that I couldn’t understand that.

Twenty minutes later, Hallbert was all set up at my desk, a large cup of coffee steaming away right next to him. I sat down, wiggled my fingers in preparation, took a deep breath… and heard drums. Then there were more drums and what sounded like trumpets, and it all seemed to be coming closer and closer.

Before I knew it, a marching band was marching up around and around in circles in the parking lot outside my house, showing no signs of leaving any time soon.

Well, you don’t have to knock me unconscious to make a point. The serious science-stuff’ll just have to wait a little while longer.
Posted by choochoo at 5:00 PM 8 comments: 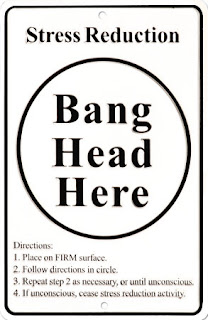 My apartment consists of piles. It’s not that I’m fond of piles. They’re not a regular part of my décor. It’s also not due to me being messy or sloppy. Although I do confess that I’m a big supporter of the orderly chaos. It’s also not that I think “Hey, sugar. Want to come over to my place and check out my piles?” would be such a great pick-up line, should Prince Charming come along.

In not too long – and certainly not a second too soon – I shall be free of the Upstairs People. No more noise, no more garbage everywhere and no more weird smells in the hallway. But as much as these things fill my heart with joy and make me want to giggle hysterically, I do hate the moving process.

And then it all accumulates in hours of heavy lifting.

Moving BITES. And blows and sucks.
Posted by choochoo at 5:00 PM 7 comments: