I can't brain today, I have the dumb! 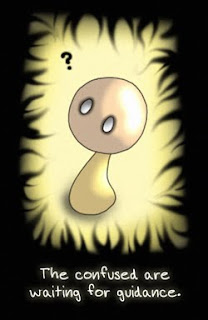 We all have our weaknesses, right? Superman got all distracted around kryptonite, Tony Stark got a wee bit diverted in the presence of booze and there are certain members of the church that seem to have a hard time focusing around altar boys. I get sidetracked by the world in general. It really doesn’t take much, especially when I’m supposed to be doing something grown up and responsible.

I know that I theoretically have the ability to concentrate. I never seem to lose track of my facebook applications; the potatoes growing on that little farm never spoils, that little restaurant is doing splendidly. The sims 3 can hold my attention for hours on end. I can sit through an episode of Judge Judy just fine. Actually, the latter is a strange sort of an exception. You see, I’ll plop down in front of the television and then suddenly it’s an hour later and I can’t really remember what the judge was going on about. Then again, I can’t really remember anything else that may or may not have happened around me either, so I’m assuming that I was very concentrated on the show and then became the victim of sudden amnesia, or something.

I was going to be all responsible and do some proof reading today, but I was completely unable to direct my attention onto that little Microsoft Word document. Things had to change. I immediately googled “how to concentrate”. Out of the 31 100 000 results, my favourite one was the one that stated that any mental achievement had to be preceded by total relaxation. You need to unwind before going into battle, it said.

So I decided to play the sims.

There is a certain chance that I need a new attack plan for my next battle.


pretty picture: The confused by Kylamay for deviantart. http://kylamay.deviantart.com/art/The-Confused-24558778
Posted by choochoo at 8:41 PM 9 comments:

First off, I would like you all to know that I am typing all of this with an Irish accent. It’s just one of those days.

For the most part, my chromosomes have combined beautifully (hey, if I don’t toot my own horn, who’s gonna do it for me, eh?), but Zombie Brain will be the end of me one day.

There I was, in the kitchen, fixing myself a cup of coffee. At least that’s what I would have done, had I had enough brain activity in my head to put coffee in the machine. I was watching the clear liquid fill in the pot, all the while feeling like something was a bit off. I poured it into my cup. I added sweetener, cream and stirred it with a little teaspoon. I didn’t notice my mistake until after I’d taken the first sip…

I then decided to get some work done on my nemesis: The Thesis. I turned my computer on and then Tootie decided to just switch all the systems off. It was the mother of all space-outs. Suddenly an hour had passed and I swear I had done nothing but stare into space.

Maybe I should try wearing an ice bag on my head while I work, or something.
Posted by choochoo at 11:10 PM 8 comments:

Those of you who have been paying attention know that I am in the final stages of mumbling obscenities at my thesis. Or as some people call it; finishing it. 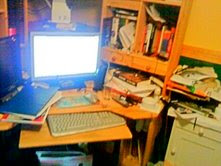