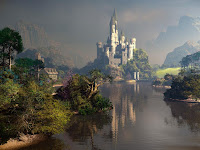 I had just made my way up the hill and started across the green lawn, shiny with dew, which lead up to the magic castle where the Bubble Gum King lived. He had stolen my enchanted acorn hat and wouldn’t give it back. At first I had thought that the hat had simply been misplaced or eaten by giant beetles, but then the herald had shown up, reading loudly from a fancy scroll. “The Bubble Gum King has stolen the enchanted acorn hat and won’t give it back. Nanny, nanny, boo hoo.” Being the heroic no-bullshit gal that I am, I was going to save it from his grasp.
Anyway, that was the plan until something hit me on the back of the head.

Next thing I know, I’m in bed and its 3:35 in the morning. I couldn’t see Pooch, but I could feel her stare drilling into the back of my neck. Sighing loudly, I rolled over.

The rubbery spikes of Pigface the squeaky toy dug into the small of my back and I had to shift a little. Pigface is a pink mockery of nature, a round freak with the body of a puffer fish and the face of a laughing pig. The spikes used to be in an assortment of different colors, but after spending hours and hours being carried around in the dog’s mouth, it was now simply just pink. Pooch loves Pigface. And when Pigface squeals it’s quite obvious to her that it’s in distress. Horrified, Pooch grabbed her beloved toy and dived into bed where she commenced the necessary licking and sympathetic whining that it took for the thing to feel better about itself.

In the meanwhile, I took the opportunity to crawl back under the duvet and concentrate on going back to sleep. I was nearly there when Pigface came flying towards my head again. Then Pooch got up on her hind legs and put both front paws squarely on my face, managing to squish my mouth and my nose together. Clearly she was serious about the whole getting-out-of-bed-thing.

Reluctantly, I complied and was rewarded by a happy roar and dance from Pooch which sent Pigface flying into the kitchen, and that in turn had Pooch flying after Pigface to make sure it was alright.

Usually there’s some sort of reason for why Pooch would throw a hysterical fit this early in the morning, so I staggered into the living room to check around. After concentrating for a couple of minutes, I managed to persuade my eyes to open enough for me to have a look around. And indeed, in the middle of the room, was The Reason. A big, wet pile of Reason.

“Next time the Chinese students from across the street offer you an eggroll, just say no!” I yelled back across my shoulder. “Or at least try to not swallow the whole thing at once.”

I cleaned up the mess, threw it in the garbage and left the bag in the hallway. Hell, if the upstairs people can keep their trash out there until it stinks like the inside of a bin, then my little bag could certainly stay there until morning.

It was now 3:58 and I was looking forwards to crawling back into bed, only to find that this might be a bit more tricky than I had anticipated. Sprawled out on my bed, lay The Pooch, on her back with her front feet tucked under her chin, her back feet straight out and her head on my pillow. She was snoring gently and her little toes were wiggling in her sleep. I always have trouble waking Pooch up when she’s all cute looking. So instead I slipped under the cover, very gently so not to wake the sleeping doggie, and ended up sleeping rather badly on the edge of the bed with barely enough duvet to cover ping-pong ball and no pillow to speak of.

I will be hitting the coffee hard today.
Posted by choochoo at 9:41 PM

I thought I was the only one foolish enough to sacrifice my own comfort in sleep because of animals.

whereas the cats just wake us up at 3am to see if they still can.

You are way too nice. I'd can guarantee that after the "wet pile of reason" Pooch would not have been sleeping in my bed... he'd have been in the doghouse. ;o)

Ha, she so manipulates you!!!

You live quite a life! ;) And you are a good storyteller. But yes if that had been my dog, he would have been sent out of the house. Of course, your living situation might hot have allowed that. By the way, I really like the picture of the castle you posted.

I like it when my dog curls up in the back of my legs. That way I don't get cold.

Your adventures with The Pooch make me think having two young children is a walk in the park.

Tom - I have no doubt that she was.

White bread - nope. There's at least two of us.

Toasty - Hehe. Yeah, well, they're cats. They own you, you know, so they're entitled to check if you still work.

Big brother - I'd miss Pooch if she was in a doghouse. Unless the doghouse was inside.

Jazz - probably. But I still control the food. Which she doesn't get unless she stares at me. So there.

Tim - I know. Just imagine how fascinating I'd be if I lived somewhere interesting.

Hammer - I know! Pooch is very, very handy when it's cold. Better than electrical blankets.

Jocelyn - People keep telling me that. I'm not sure I believe them:P