What not to do. Unless you're bored.

Too lazy to feed the cat? Here is the perfect solution which will provide your cat with all the food it needs and at the same time depopulate your whole neighbourhood of those pesky robins, wrens and sparrows. The device works by enticing little song birds into a welcoming, homely, birdhouse. Once inside they step onto the pivoted stand and are ejected down the shoot into the lower section where they remain trapped until puss is ready for his lunch. You will never need to open a can of cat food again in your life. 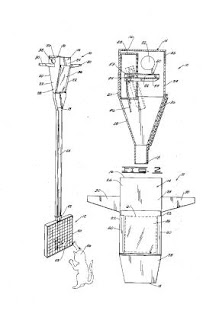 You telling me that’s not strange?

For example, there’s a law in Alaska that says you can’t look at a moose from an airplane. In Miami, it is forbidden to imitate an animal. California law prohibits a woman from driving a car while dressed in a housecoat. Actually, there probably should be a law against wearing a housecoat in the first place, and there certainly will be, when I take over the world.

In Utah, birds have the right of way on any public highway. In Ohio, one must have a license to keep a bear. I wonder what the punishment is for bear-keeping without a license.

In North Carolina, it is against the law for dogs and cats to fight. In Singapore, it is illegal to chew gum. In Cleveland, Ohio, it is only illegal to chew gum in public places. Otherwise, it can be your dirty little secret. Maybe you could get down with your bad self and go to dodgy gum-dens.

I never knew the kind of pressure chickens were under, either. In Virginia, chickens cannot lay eggs before 8:00 a.m. and must be done before 4:00 p.m.

In Massachusetts, it is against the law to put tomatoes in clam chowder.

In Washington State, you can’t carry a concealed weapon that is over 6 feet in length. In San Francisco, there is an ordinance, which bans the picking up and throwing of used confetti. In the state of Colorado, a pet cat, if loose, must have a tail-light.

In California, a law created in 1925 makes it illegal to wiggle while dancing. In Utah, daylight must be visible between dancing couples. In Michigan, it is against the law for a lady to lift her skirts more than 6 inches while walking through a mud puddle. What if you stand next to the puddle with your skirt above your head? Can they get you for that? In Missouri a man must have a permit to shave. There’s also a law stating that more than 3000 sheep cannot be herded down Hollywood Blvd at any one time.

Some of these I would really like to try out.
Posted by choochoo at 9:29 PM

Labels: stuff I don't get, things I do out of boredom

Is now a good time to become a policeman? :D

So, what are some of the crazy laws in Hellhole?

much wackiness. I like the toaster in the tree concept tho.

Oh, you've taken me back to high school, when I was on the speech team and, for an entire year, did an oratory on "the dumb laws still on the books." I won awards. That means you should, too.

I want to break every one of these laws, well except for where I would have to be a woman, I look horrible in a housecoat, and driving while asleep, that might end badly !!

In Missouri, beginning August 29, 2009, all sawmills within the state borders are to be called flower shops or farms.