Ain't nothing common about it!

You know that thing we did where we decided to sleep in the living room to see if I was allergic to the carpet in the bedroom and if that could be what was causing my mysterious cough? That hasn't quite gone according to plan.
This was the plan: We would sleep in the living room on the fold-out couch and already on the first night my throat would feel clearer, I would be more rested and wake up happy. Kinda like this: 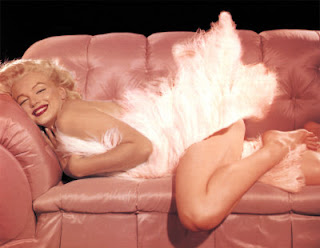 This is what actually happened: I woke up, noticing a strange soreness in my throat. I didn't give it any more thought, since it disappeared sometime between the time that I slipped into my robe and when I crammed a sandwich into my face. Then the coughing went rampant. The next day I woke up kind of like this: 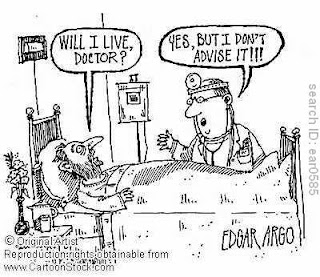 It's the common cold. Again. Although I'm pretty sure I've caught an uncommon cold. Surely nobody has ever suffered the way I'm suffering. I'm the most miserable, most unhappy little sicko in all the world, ever.
Since I live here, Mister Chooch has no choice but to take care of me. That was my plan all along, of course. He brings me food and and he stands outside the bathroom door with a glass of water and says "poor honey" while I talk on the big porcelain phone. But he doesn't particularly want to hang out with me, because my cough is giving him a nervous breakdown. It's funny, really. I cough until I retch, and HE'S the one who looks like he's going to drop dead.
Have a video:

Were you wearing the feathers? The feathers could've made all the difference in the world.

Jazz - no. But I did fall asleep with one sock on at one point.

And the big question remains: Is your cold as bad as the 'man flu'? In any case, you have my sympathies.

from what I've seen, rampant leprosy wouldn't be as bad as the man-flu