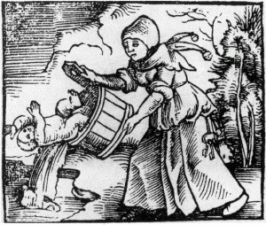 June is the most popular month for weddings. It’s been that way since the 1500s. This was because people would have their annual baths in May, and still considered themselves relatively clean in June. However, they were starting to give off a certain scent, and that’s why brides would carry a bouquet of flowers to hide the smell. And that’s where the bridal bouquets come from.

Baths were just a big tub filled with hot water. The man of the house got the first crack at it, then the sons and the other men. Then the women were allowed to bathe and the babies went last. By the time it was the babies turn, the water would be so filthy that it was quite possible to lose a person in there. Hence the saying: “don’t throw the baby out with the bath water.”

And are you gonna get married this June? And then start throwing babies out?

wow..marvelous.. so much information in so simple and less words... amazing share by you... keep it up...

I never understand why people are nostalgic about "the good old days." Sounds sucky to me.