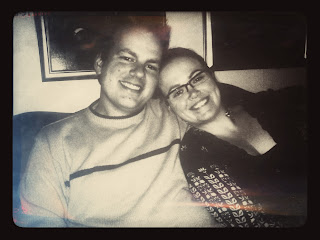 2. Shes a microbiologist (freelances atm) and he lectures in English and media science.

3. He studied at the university of Aarhus, she at HIT.

5. They were engaged in London in November 2012 (I think. It might have been October. What do I look like? Some sort of calendar app?)

6. They met on the internets.

7. She's Norwegian, he's Danish. They live in in Denmark, in a little house, made out of red bricks. They have little or no control of their garden.

8. They love video games. And computer games. And phone games and iPad games. Not so much with the board games, though. Especially not trivial pursuit.

9. He is a coffee Fanatic with a capital F. The kind that researches brewing methods and stuff like that. She likes hers with lots of sweetener and cream, and she doesn't notice if it's instant.

10. She's incredibly ticklish. He isn't ticklish at all. It's horribly unfair.

11. She talks in her sleep. Sometimes he lays awake and writes down what she says, and then emails it to her. She then absolutely denies ever talking in her sleep. It goes something like this: "I only ever make dainty, lady-like noises, even when I'm unconscious." He responds with a lot of eye rolling and makes comments about snoring...

12. They're not really planning on having any kids. They don't think they have the patience or enough gaming consoles.

13. She has never travelled all that much. He's been pretty much everywhere. Even weird places.

14. She keeps forgetting to shut off the faucet in the bathroom. He's reminded her a gazillion times. It never takes.

15. She's always losing microfiber cloths (clean iPad screens are VERY important). He keeps reminding her to put them back. That never takes, either.

16. She always used to take a glass of water to bed in the evening, and would forget to bring it downstairs in the morning. Eventually, her side of the bedroom would be full of glasses. He found that just a tiny bit annoying. Then she stopped (for the most part). Now he's doing it.

18. He hates sleeping in chilly rooms. She's always liked to keep the bedroom windows wide open, even in the dead of winter.

19. She likes to name all her favourite stuff. He then threatens to take them back to the store, but he never does.

21. He cuts open his egg rolls and fills them with ketchup and remoulade.  She thinks he's a freak.

22. They have really strange inside jokes. Like "f*ck eggs!" Get it? No? My point, exactly.

23. She is completely addicted to diet soda and sweetener. He doesn't even put anything in his tea.  He's always reading articles about the evil of Aspartame and telling her about them.

24. She cries easily if she's sleep deprived. He knows to keep the cookies and candy coming on those days.

27.  If you tickle her underneath the chin, it causes an involuntary spasm. Because she HATES that. If there is such a thing as reincarnation, one of her causes of death would probably have been piano wire. He once chased her through the house with a camera in order to document it.

28. Their (third) anniversary is in March.

29. She's fascinated by zombies. He sometimes pretends to be a zombie and she pretends to not be totally creeped out by that.

30. She always walks around with her nose in a book. He gets  nervous when she's going up or down stairs.

For the record, it IS strange to put creme fraiche on pizza.

Walking around with one's nose in a book is totally normal.

If everyone ate bacon there would no longer be wars. Bacon rules.

PS: And you guys are cute!

And I had no idea you were in Denmark. I imagined you being in Canada. Or maybe Minnesota. I have no idea why.

Hear that, agent? If everyone ate bacon, there would be no war! Eat your bacon!

Nah, just kidding. I will totally eat your bacon for you.