The Day My Ear Pooped 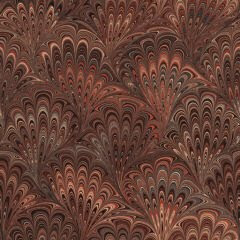 Yesterday I had the dubious pleasure of having my earprofessionally rinsed. I mentioned before that my ear was itchy and driving me batsheit crazy, yes? Yes. That is why I found myself sitting in the doctors office once again, while the good doctor apparently tried to burrow into my brain with her lookey-inside-the-ear-thingy. All the while she said "hmmm" and "mhmm" a lot. I think there's a special course in med school for getting the hmm's just right.
Five minutes after that, I had a green towel draped across my shoulder, a small basin nestled under my chin and a huge metal water-filled syringe in my ear. I must admit that I found the situation to be a bit daunting. I'd only been through this once in my life before and I couldn't remember what it felt like, only that I screamed a lot and had to be held down. I think I was about four years old at that time. This time around, I wanted
to be a bit more composed.
Then there was a swooshy sound and then...well...then my ear pooped. Sometimes things are so gross that they're fascinating. I would have taken a picture if I hadn't thought that might be weird.
Afterwards I felt as if someone had smacked me upside the head with a 2x4. My balance center had not been prepared to have large amounts of wate
r shot at it from a syringe. You'd think evolution would have thought of that, but no. I still have zero hand/eye coordination, which makes life interesting. You should have seen me at the grocery store before, trying to put things into my little blue, plastic basket and missing the basket again and again. Things kept falling on the floor. It was embarrassing. I've probably earned myself a reputation as the town drunk. And I didn't even get to go to the party.
Until this dizziness has buggered off, all responsible grown-up activities are shelved. Until then, I will do this: 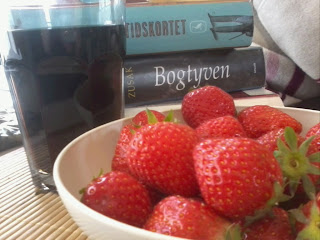 First time I've heard of a pooping ear. Scary/gross/fascinating... If you can't get those strawberries to your mouth, I'll eat 'em for you.

Well, now, that's disgusting. But also weirdly interesting. I think lounging and reading and eating beautiful strawberries might be just the ticket. I'd probably throw in some wine and chocolate, just to be safe.

it's always such a nice surprise when your template just melts. Hopefully it'll behave now, though.

Better to have a pooping rather than constipated ear in the long run.

This post could have ruined my appetite, had it not been for your post image, which for some reason reminds me of a commercial for Dove Chocolate. I will forevermore become hungry when I think of ear poop!

I got a little derailed from the point of your post when you mentioned bacon. Sort of, well, I started my own dream right about then. About bacon.

Wow that that is just really gross