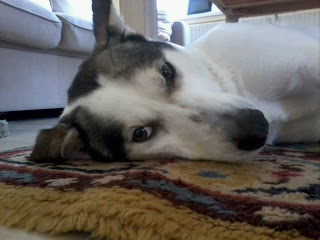 You'd think that a dog who's 11th birthday is fast approaching, would want to snooze in the sun or partake in other activities that require a minimum of moving around. Not Pooch, though. Pooch likes to bounce. And skip and hop. She's more jack-rabbit than dog. The old gal makes Dorothy skipping down the yellow brick road look like a fat, lazy cow.
The other day, Wonderpooch was jumping around, when she slipped on the parquet floor and pulled whatever-dogs-have-in-stead-of-an-ankle on her front leg. Much whimpering (mostly from the dog) and limping ensued, as well as a chat with the friendly neighbourhood vet. Now her leg is all wrapped up in bandages that aren't anywhere near as cool as Dorothy's red shoes.
Mister Chooch and I decided it was best to keep her still as much as possible. This became a bigger challenge than we had thought, since ten minutes of lying still completely erased the memory of having been injured and replaced it with the urge to dance. A couple of times, Pooch would give us little heart attacks by trying to run upstairs to see if there were any good sunbeams on the landing. Eventually it became clear that the only way we could make sure that she would stay in her bed, like a good little patient, was if we sat next to it. Which we did. For several hours, until Dog decided to pack it in for the night.
Now she's feeling much better, and suddenly her main interest is napping. Stupid dog.
Posted by choochoo at 9:36 AM

It was in just such a fashion that my interest in napping was born!

She's so purdy Pooch is!

And today's word verification is: Hopwoodr (she hops. on wood floors... see?)

Yeah, I'm easily amused - now lets see if I can type that right.

Stupid but loveable. And essential. And so fluffy!

Jocelyn - well, you have to get your interest in napping from somewhere.

Jazz - she does get by on her looks. Even in her old age.

Uncool - she is, and apparently determined to hurt herself again soon.

I'm liking Wonderpooch. What a lovely face. As a huge dog lover (not that I am huge or I only love huge dogs)I always like puppy tales. Max would approve as he read along with me.