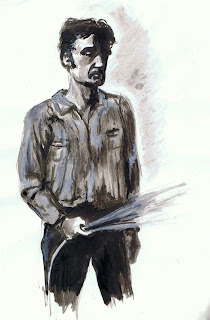 One of the things that I like about living here, is the lack of neighbours. There are only four houses on our street. That and a really big field. I pretty much went off neighbours the past year before I moved here. There were very spesific reasons for this.

For example, there was the Big Orange. For those of you who are new around here, the Big Orange was my landlord who had some… issues. To put it gently. After I pretty much escaped from my apartment (due to Big Orange being crazy and all), I ended up living across the street from Mr Immaculate Driveway.

Just like Big Orange needed his lawn mowed at the exact same time every Wednesday, Mr Immaculate Driveway needed his driveway CLEAN. Every single morning, afternoon and evening he would hose it down thoroughly. This would take from 20 minutes up to an hour and gawd only knows how much water. The black concrete would glisten. He also wanted to have walls of pretty masonry lining it. This is why he decided to hire a small army of pollacks to make his dream come true. That’s what people do in the ol’ country when they want carpeting or such done cheaply; they hire pollacks. Summer is high season for these things. Usually they get what they pay for.

The Pollack army arrived at the same time as summer vacation. I don’t think there’s anything quite as grinding as the sound of masonry. After a while, those buzz-saws start to feel as if they’re physically cutting into your brain. It certainly took all the fun out of sitting out in the sun. The enormous cloud of dust that they generated also did it’s part to spoil the mood. For the first couple of weeks, they would start working at 8am and keep going until 9pm, Monday through Saturday.

At some point during the hiring process, Mr Immaculate Driveway should have asked his new staff a question along the lines of: “would any of you happen to be masons?”

The answer would have been: “Not so much.”

Mistakes were made. Lots of them. That lead to the workers to keep working until past ten in the evening. This lasted for five weeks. I’m amazed that nobody tried to kill the guy. He would have come second to Hitler in a popularity contest.

Mr Immaculate Driveway had bigger concerns. His property was covered in stone dust. His beloved driveway rapidly turned a dirty sort of grey, despite a vigorous hosing routine. At first he tried to hose it down regularly, while the pollacks were working. That didn’t work, so as soon as the lads knocked off for the evening, he resorted to giving it a cleaning unlike anything it had ever seen before. He would put the hose away once it started to get dark.

The only time during those five weeks that we had a quiet day (other than Sunday), was that Saturday when it rained. I stood in the window, hugging my cup of coffee, watching Mr I.D. He was out in the rain with an enormous red and yellow umbrella, hosing down the driveway.

Can’t say I miss him.

Picture: "hosing down" by Ellabll for deviantart.
Posted by choochoo at 5:32 PM

I hate having my peace encroached on in such a way. Makes me homicidal and powerfully profane as I express my indignation.

I was going to kill the guy with his own buzz-saw, but the ppl I were staying with stopped me every time I was on my way over there. Or I'd probably have been in prison by now.

Good to not be crowded, hey? At least you got a blog post out of him.

He stopped hosing once it got dark? Hell, in Norway that's like 2:00 am.

It's a wonder you didn't have a contract taken out on him.

PS: nice to have you back

What a waste of water! I really have an issue with people who squander the earth's resources like that. A little water for your plants, yes - a thrice-daily driveway dousing, no.

Jazz - it's cause I have the patience of a saint, I do.

Secret agent woman - I know! And this was during high summer, when there's a watering restriction due to the dry weather. What an arse.