The story of Stalker Kitty 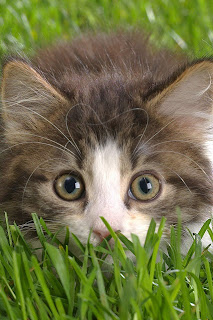 Pooch is a sucker for a good walk. Mostly I just walk her while Mr Chooch is still at work, but sometimes we take her for a spin together. This is the story of when we took Pooch for a spin and met Stalker Kitty.
It was late one evening last fall. Mr Chooch brought an umbrella with him, in case of rain. Little did he know that on our way home, it would rain kittens. At least one kitten. A stalker kitten.

We didn’t see it at first. There aren’t a lot of lights on our street and there are plenty of trees, hedges and shrubs where small furballs can hide. I just happened to turn around as it darted out of hiding, heading straight for Pooch. It intended to introduce itself. I don’t know what kind of experiences it had previously had with canines, but they were clearly deliriously happy ones.

Every now and then Pooch meets a cat in the garden, but HER way of introducing herself involves chasing the cat into the nearest tree. A few of those cats will just turn around and look at her as she’s running towards them and she’s very unsure of how to deal with those. I had no idea how she would react to this one.

We didn’t really think that the dog would nibble the kitten, but we decided it would be best to move on before it caught up. Every now and then we would look and see Stalker Kitty running after us, staring at Pooch as if she was the worlds most shiny toy. Mr Chooch made several attempts at chasing it away. Each time it would hide in some shrubbery, but as soon as his back was turned, its little head would pop back out and it would be in hot pursuit once more. The only effect the scare tactics seemed to have, was that it no longer wanted to say hi to Mr Chooch. It was, however, dead set on saying hello to Pooch.

Pooch still hadn’t noticed that anything unusual was happening. Sometimes Pooch is kinda thick and not terribly observant. She mostly gets by on her looks.

As we walked up our driveway, the kitten was still following us. Because of it's short, little kitten legs, it never did manage to catch up to Pooch before she shot through the front door, heading for her water bowl at 100 miles pr hour. Mr Chooch then sprinted down into the basement to close the windows that we’d left open. Meanwhile I stayed outside to distract Stalker Kitty so it wouldn’t notice that there were ways into the house. It was a very friendly kitten. It smelled kinda like baby powder. I thought about stealing it, thinking it could perhaps live in the hobby room, or something, but reluctantly decided against it.

After I’d gone back inside, I watched Stalker Kitty through the window. Stalker Kitty was staring fixedly at the front door. After a few minutes a bug or something caught its attention. At that moment it completely forgot that we ever existed, as it chased whatever-it-was off into the night.

And that was the story of the very intense, yet very flaky Stalker Kitty.

Photo from BG Plus for iphone.
Posted by choochoo at 8:00 AM

I think in their heads, domestic cats are lions.

This story left me wishing we had our very own stalker kitty during walks with our dog. What fun that would be!

But the real reason I am commenting is the googgle add just below this post. When I entered your site, rather than the typical list, it was an image with the headline:
"Curiosity killed the cat
box"
The product was cat Gennie or something. Originally thinking this was part of your post... it gave a very spooky overtone to the ending... :)

Secret agent - sometimes I'm not sure I want to know what goes on in their heads, lol.

cbeck - sometimes google ads are their own logic.

Tattytiara - it was pretty cute, the stalker kitten. Hence the considering of the keeping.