The year of funny urges

Sometime after I moved here, aliens abducted me and implanted a personality-altering probe into my brain. Ever since I've been having these insane urges, and that's the only logical explanation I can think of.
I used to have a very high tolerance for dust bunnies and clutter. Not that I was a dirty slob, or anything. I just enjoyed the lived-in look. These days... not such a big fan. Boy actually made me promise that I would tidy up LESS, because it was messing up his system of things he was supposed to remember and such. That's the first time anyone has ever said that to me. Ever.
Afterwards I went into the bathroom, stood in front of the mirror, put my nose up against the glass and stared into my own eyes. Then I said: "mother?"
Today I woke up with the urge to weed. My brain (which consists of the logical part, bergerac, and the irrational bit, tootie) was just coming to life and Tootie was already wide awake and screaming "weeeeeeeeeeding-time!" at the top of it's lungs. That part of my brain has wonderful lung capacity.
But fate intervened: 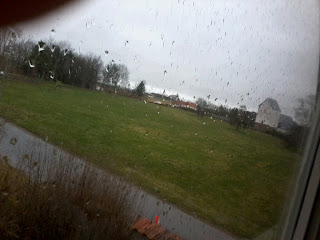 See that dark bit in the upper left corner? That's a UFO. Okay, so it's my finger. Never claimed to be a photographer, did I?
Have a song:
Posted by choochoo at 10:33 AM

Tootie seems to be gaining the upper hand here. Maybe you're becoming a desperate housewife.

You can have worse (albeit more interesting) urges than one that compels you to weed.

I have that "weeding time" voice, too.