Today I swallowed a camera

Right after I moved to Denmark, I started coughing something awful. I'd cough until I threw my cookies, and I would do that several times every day. It was exhausting and not terribly sexy. Not to mention that it makes your food budget much bigger than it needs to be. The doc figured I had asthma, but she was a bit stumped at my freakishly awesome lung capacity. Seriously, my lungs should wear a cape, or something. Then she was stumped some more when my meds didn't really work all that well.

So off to the lung specialist I went. They told me that I didn't have asthma at all, and sent me off to yet another specialist to have a gastroscopy. Thats when they run a tube the width of a finger, with a camera attached to it, down your throat, into your stomach. There are no words to adequately describe how gross that is. It didn't hurt at all, it was just....yeah. Especially when the doctor decided to pull it up a bit and then back down a little, and then to turn it around and around.

There was a nurse in the room, who's only job, apparently, was to stroke my hair and go "there, there...it's almost over," while dressed in an outfit that was clearly meant to be thrown up on. I hope they pay her very well.

The camera guy told me that I didn't have a closing muscle (which I already knew) and that's why I've been having "asthma" (which I didn't know) and that if the medication he was going to prescribe didn't help, they would operate (which I didn't want to know, and pretended not to have heard.)

At least there was a present in the mailbox for me (from me) when I got home; touch my katamari! Which isn't anywhere near as dirty as it sounds. 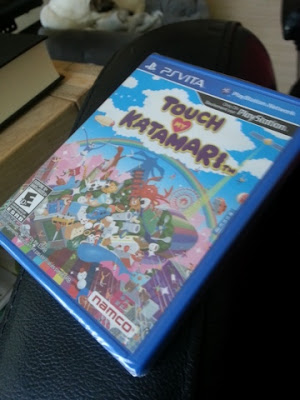 I'm sorry, but Touch my Katamari sounds completely and utterly kinky - and at total odds with the illustration.

You were awake for that? I thought they knocked you out these days? I don't think I could tolerate it - I have a very sensitive gag reflex.

Oh yeah, I got the full experience. No drugs at all. Yay...

Hi colleagues, how is the whole thing, and what you desire to
say concerning this article, in my view its truly remarkable for me.

You need to be a part of a contest for one of the most useful sites on the web.
I am going to recommend this website!

What's up, the whole thing is going perfectly here and ofcourse every one is sharing information, that's actually excellent,
keep up writing.