Ahead of my time 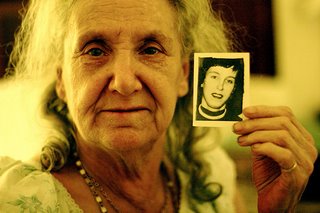 I've been 27 for a few weeks now, and at some point I started thinking of myself as being 30... I don't know what it was that caused it, it just sort of happened. Of course I know how old I am. I can count. But still there's this little voice in the back of my head (sometimes it speaks with a slight accent) that insists I've hit the big 3-0. Obviously, this voice isn't the sharpest tool in the shed.

Another thing that The Voice keeps nagging me about, is that I should be finished with my education soon and focusing on a career - being so old and all. This concern would make sense if I was living in, say, the 16th century (not that I'd be spending much time on either of those things then), where people turned 30 and then died of consumption. Or from the doctors remedy when they were being treated for consumption. I try telling it that I've already done one degree (more or less) and that I am going to finish the second one soon, but it seems that The Voice is more of a talker than a listener.

Some mornings, it also tries to convince me that I left the coffeemaker on, that I forgot to lock the door, or something like that. Sometimes it reminds me that it's time to clean the fridge or do the laundry or put away my shoes properly. Then it sounds exactly like my mother...

hmmm, your mothers voice is nagging you...shoot your mother its the only answer! lol

she'd come back as a ghost:)

After the entry about buttons, and now this one, I am starting to wonder if we are lost sisters or something. Maybe we spawned of the same alien pod.

Tell the voice to shut the fuck up. Eventually you have no choice or listening to it will force you to kill your mother.

Tell the voice to shut the fuck up. Eventually you have no choice or listening to it will force you to kill your mother.

the voices made you do it?

Oh, and yes, Lively. Maybe we both came off the same mothership, or something. lol

are you happy being 30?
then be thirty.
are you happy getting an education (though i know its really hard sometimes)?
then do it.
are you doing somehting right now that you will regret later?
then stop it.

i think, when we are old and dying, we will look back on our lives and be happy, or regretful.

you have to make decisions that will make you happy.

listen to The Voice that tells you whether you are truly happy with your life.

ignore the other voice. screw 'em!

Pickle - I don't really like being thirty, as it makes me feel like I'm late for everythinhg. I think I'll stop that:)