Do I look fat in this? 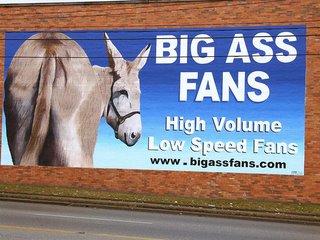 Today I was going out for lunch with two of my friends and some girl I've never met before. We went to pick her up on our way to town, but she wasn't ready yet. So we all sat down on her bed, and chatted while we waited for her to come out of the adjacent bathroom. An eternity later, she did, wearing a top and a short skirt, and stood in front of the mirror, while staring hatefully at her reflection.

At this point her boyfriend/husband/whatever made the mistake of walking past the open bedroom door. "Honey?" She called. The poor guy looked as if he knew what was coming, because his whole expression changed and he pretended not to hear, at the same time as he started walking very quickly. At the very same second, the woman jumps out the door after him, grabs him by the arm and more or less hauls him into the bedroom. Obviously, they'd been through similar rituals in the past...

"Do I look fat in this?" she asked him, while turning around.
"Uhm... no," he answered. After all, only a suicidal lunatic, with a wish to have his nuts sliced open and filled with salt, would answer yes to a question like that.
"But you can see the cellulite on my thighs..." she said.
"Cellu-what?" The boyfriend looked as if she had named some alien disease, or something. He obviously had no idea what she was on about, and I couldn't help feeling a little sorry for him.
In order to clear up the confusion, the girl then grabbed a hold of the skin on her right thigh, and squeezed it together(I don't know if anyone has ever tried this at home, but it's not the most flattering look), while she looked at him and shouted "SEE?".

At that point it appeared as if world war 3 was going to break out right then and there, so we muttered something about waiting in the car, and got the hell out of there. Ten minutes later, my friends cellphone rings. It was miss Cellulite. She wasn't feeling well, and wouldn't be able to have lunch with us, after all. I don't think I've ever been so relieved in my life.

yes dear you look fat, you are fat, learn to live with it and go out and have fun! lol, oh to be honest.

I'll bet she was some little skinny malinky...

Funny, in my 20s I thought I was fat when in fact I wasn't. Since then I've gained some 20-25 lbs and I basically don't care much. Gotta love gaining the ability to relativize such things as you get older...

Gawd, that poor girl. I also feel badly for you and your friends for having to wait and all.

It was still a funny story, in that pitiful way.

Whew, you barely escaped that one.

Whose friend was she? That friend doesnt get to pick lunchmates anymore.

If Ms. Cellulite HAD been able to leave the house that day, she would have criticized whatever it was you ate for lunch. Good thing the war broke out before you were in too deep.

Your friend is nuts. No one needs to worry that much.

the girl is built like a catwalk model, of course. And no, my friend will not be picking out lunchmates anymore (and I know she's reading this).

lmao! Well if she's skinny I think my original comment is the ONLY way to respond to her ridiculous insecurities from now on.