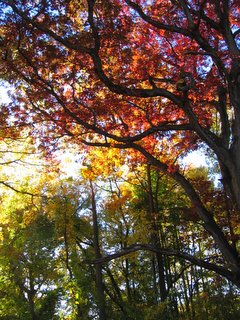 Every summer I grow accustomed to having a nice, toasty warm bathroom all day, despite the oven not being plugged in. This morning my bathroom was chilly. Not exactly cold, but definitly not warm, either. In the shower, I actually shivered a bit and wished that the beam woud be bigger. I toweled off with the cabinet closed, because the air in there was warmer than it was in the rest of the room.

In no way, however, do I recognise this as being a sign of fall. Neither is the scratchy, icky feeling in the back of my throat or the wolly sensation in my head a sign of the flu, which always goes around at that time of the year. Nope. Not a chance. It's summer, dammit. Late summer, perhaps, but still... The leaves might be turning yellow, but all sorts of things could be causing that. Maybe they're sick, or something.

I deny the existence of such a thing as fall, and I'll keep right on denying it until I see snow. So there.
Posted by choochoo at 3:11 PM

Hi Choochoo, Thanks for visiting my blog. I'll be back to yours. You're funny.

Thank you. You're welcome to pop by any time, of course:)