The demise of Fluffy The Cat 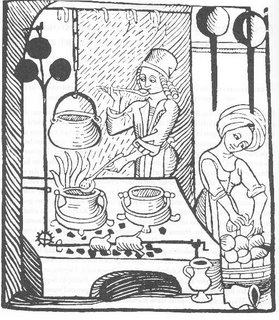 I'm not really... how should I put this... domestic. Never have been, probably never will be. I have mates who make fun of me for this. And I'm fine with that. Every once in a while, though, I get sort of a fit, and clean the whole house until it sparkles, but that's more temporary madness than a permanent state. I'm not a pig or a slob, or anything. I'm just a huge fan of that lived-in-look and ready-made meals.

So the other day I pick up one of those tubs of noodles with veggies that you just pour boiling water into and it's done in three minutes. The box said that it contained "healthy vegetables and meat from livestock", but the content looked nothing like the picture. Take the livestock-bits, for instance. I'm pretty sure that if mice were able to poop squares, that's what they'd look like. Actually, it's probably what they'd taste like, as well... While I ate (I really will eat just about anything), I formed a theory that someone's cat or something had fallen into the machinery by accident. Somewhere there's a missing-poster for Fluffy the cat or Fifi the dog, or something along those lines, and I know where he/she is. Or was.

My meal was nutricious enough to fill me up for just almost half an hour. Poor Fluffy the cat died for nothing...
Posted by choochoo at 4:21 PM

you are, entirely, twisted. It's good.

but I'm lovable, though

Now we know how curiosity killed the cat. Fluffy was too close to the machinery at the noodle plant.