Drink coffee - save the environment 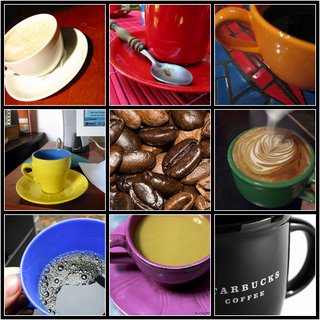 For some reason, todays lectures were so boring, I had the almost irresistable urge to rip my head off and throw it out the window, just so that I wouldn't have to be there. After a couple of those, I had three hours off before round two.

Understandably, I needed caffeine. So I grabbed my handbag and hurried down to the coffeeshop. There was a new girl behind the counter that I'd never seen before. It turned out that she had a very special talent. Would you like to know what it was? Okay, I'll tell you. She could make a cup of mocca that tasted exactly as if someone had put out their cigarette in it. After I drank it (I really, really needed the caffeine. Desperately), I felt as if I'd just smoked. For those who enjoy smoking, this would be the perfect package: coffee with a built-in cigarette. And at no extra cost. It's a much more environmentally friendly way of doing it.

Someone once told me that cigarettes actually cause more pollution than cars. I don't know wether or not that's true, but if it is, this would be the ideal solution. And I should, of course, get some sort of cash award for discovering it.
Posted by choochoo at 5:36 PM

So you're through with that coffee shop? Maybe she DID put a cigarette out it the moka...

Well, I'm not ordering anything there as long as she's behind the counter anyway. And I watched her make it. There was no cigarette. And yet there was. Magic.

Dear first Cars pollute vastly more than ciggerette smoke.....second did you get a Mocha Latte or a moka cafe or a what?

well, the pollution thing did sound a bit odd:)

And I got a double mocha cafe. It had to be a double... lol