This is my brain on germs 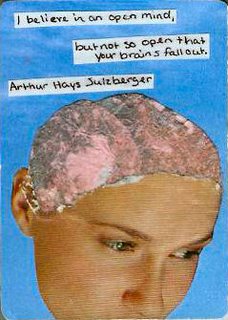 I am so sick of bein sick, I could throw up. And I did. Several times. At least now, I have a new project: that lung might not wanna come up, but that doesn't mean it can't be done.

Just in case the flu wasn't enough for me to think about, the hospital sent me a brief and polite letter about the importance of gynecological examinations. You should have one yearly, they say. It was pretty much the same letter that they sent me last year, only that one was about breast exams. Apparently they're eager to get their hands on something or other.

I've never had a gynecological exam in my life. I once shook hands with a gynecologist at a party, and, frankly, that was a bit weird. I mean, you have a certain idea of where they've been. I'm prepared that my doctor might tell me to get one when I go to get my prescription for the pill refilled (it's not unusual that they do, after all), but so far he hasn't.

If I had live in the olden days, the doctor might not have thought that I needed birthcontrol. There was a theory back then, that intelligent women (yes, I like to think of myself as having a brain. It's more fun that way) didn't, because the development of their intelligence led to the underdevelopment of their genitalia. Probably just as well, because women weren't supposed to talk to men about their private bits, and men certainly weren't supposed to be lookin' at'em, so most gynecological exams took place very quietly in the dark.

See how my head works when it's sick? Oh dear...
(pic by Becoming Unseen for www.flick.com)
Posted by choochoo at 10:30 AM